Yesterday was a little different than usual because instead of having Lindsey make the dough I had a chance to make the dough. It took a long time for us to figure out what kind of challah we would have for shabbat this week. I have been dying to make a s'more challah for over a week now. We felt that it was the perfect summer challah. Just like original s'mores we were definitely left wanting s'more.

First, pour the warm water, yeast, and honey into a large bowl. Then mix it lightly with a wooden spoon. Let the ingredients sit for about 10 minutes, or until you see small eruptions. I'm not really sure what it means for the yeast to erupt so I just waited for 10. The challah still comes out perfect so no need to worry.

Next, add the eggs and vegetable oil, but make sure to mix the egg yokes and whites together before pouring them into the bowl.

Add the sugar and flour to the bowl but remember to add the flour cup by cup and mix it in as you go. You will probably need to adjust the amount of flour you use based on if the dough is no longer sticking to your hands. You can use the four cups as a guide and add or subtract from there. It is important to add the salt after the second cup of flour because the salt prevents the dough from rising.

Now you will need to kneaded the dough a little and then make the dough into a ball. Once it is in a ball shape place in the bowl and cover it with plastic wrap. Allow the dough rise for about an hour or more. You will know when it is ready for the next step when the dough has doubled in size.


Once the dough has doubled you will knead the bread again to eliminate all the air bubbles. Add some chocolate and marshmallows into the dough now. Warning the Marshmallows are a pain in a the butt to work with! They don't want to stay in the dough so you have to push them in hard. They also get really sticky and get stuck to the counter when rolling them out. You will also add more chocolate and marshmellows later when making the strands. 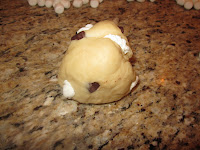 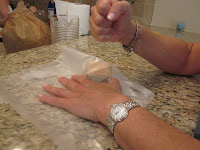 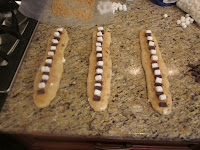 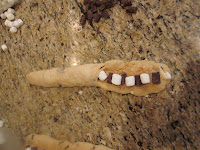 Place the pans into the oven and let them bake for about 30 minutes and 350 degrees or until internal temperature is around 170 degrees. Usually we bake our challah for 30 minutes but this time we only baked it for 28 minutes. To make sure they both cook the same way you should switch the top and bottom pan after about 15 minutes. 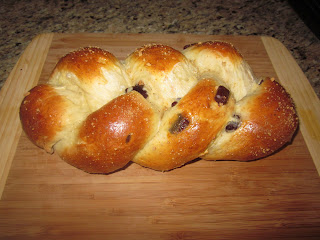 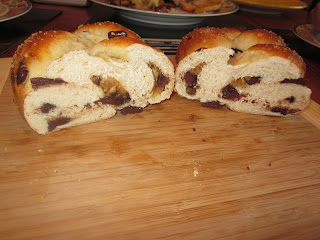 The only thing left to do now is eat s'more.
Posted by Unknown at 12:25 PM