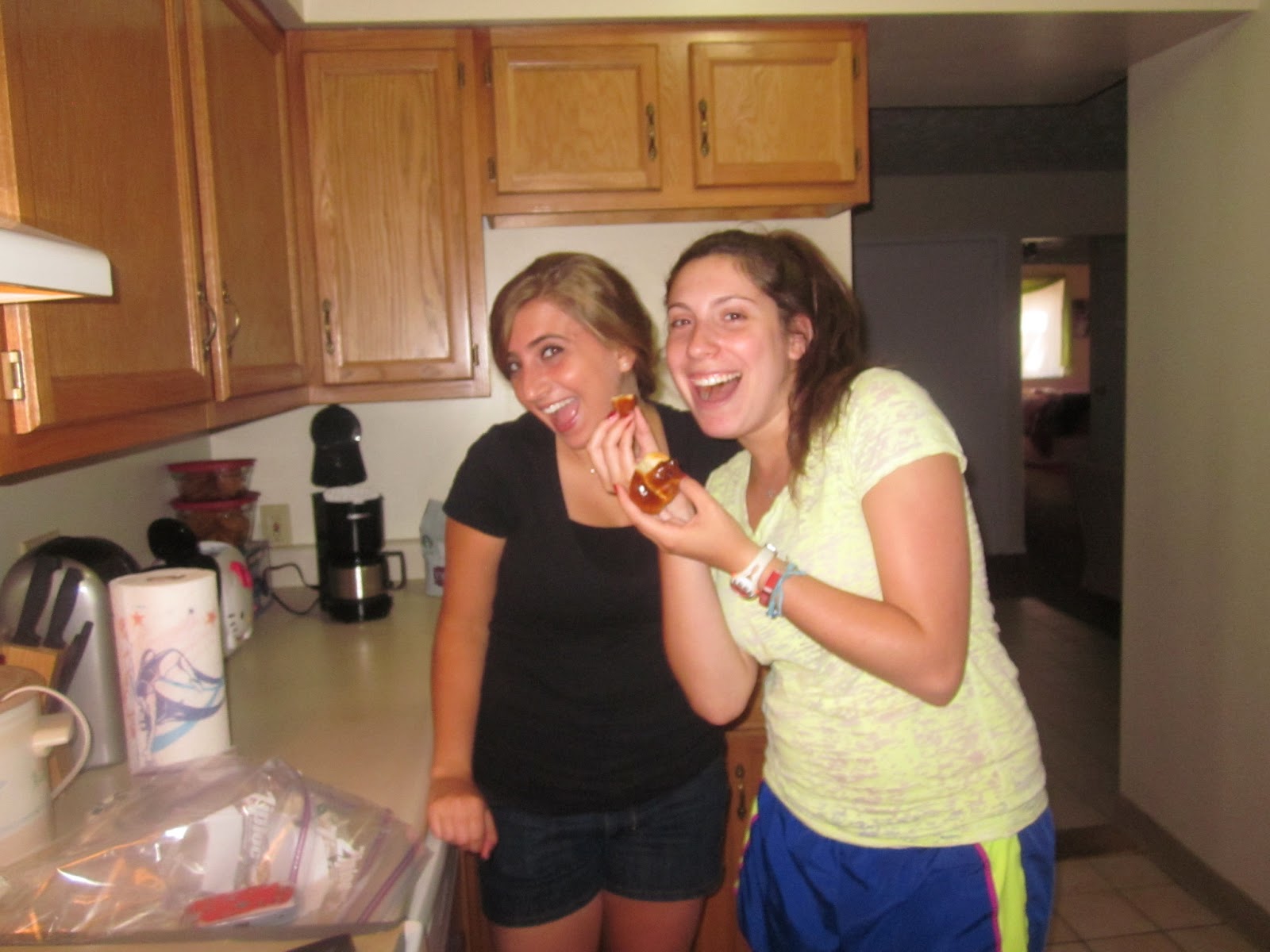 I started writing this blog yesterday, but then I decided that I would watch movies on my computer instead since I like resting on Shabbat, yea I know I'm such a great Jew. So now I'm currently sitting at the library avoiding studying for my accounting information systems exam that I have tomorrow night. Lets just say that if any of you ever have a question on what fraud is, how to avoid it, or how to implement internal controls, I'm your girl.

So Instead of going to a seder tomorrow for the first night of Passover I will be taking an exam, lucky me. I guess when professors get emails telling them not to put exams on major Jewish holidays they take it more as a suggestion than something that should be implemented. I would have rescheduled my exam, but my professor likes to make his makeup exams harder than the regular exams. It's kind of ironic that Jews are being treated unfairly on passover even years later. But if anyone out there wants to take my exam for me and will guarantee an A- or higher let me know. Well I guess I better go back to studying... the last thing I need right now is an Asian F.

Mix water, yeast, honey and sugar in a mixing bowl. Place in a warm place. This could be next to a window that gets sunlight, or I like to place it in the oven at 120 degrees and then turn off the oven. Let stand for about 10-15 minutes or until the mixture starts to foam. 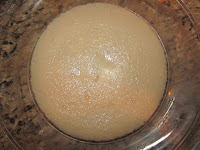 In a separate bowl mix 2 eggs and oil. Add to the yeast mixture after it has foamed.

Knead the ingredients and form into a ball. Oil the large bowl and then roll the ball of dough in the oil. This prevents the dough from sticking to the bowl as it rises. Place the ball back in the bowl and cover with plastic wrap. Place it in a warm place. Let the bowl sit for about an hour and a half, or until the dough has doubled in size. 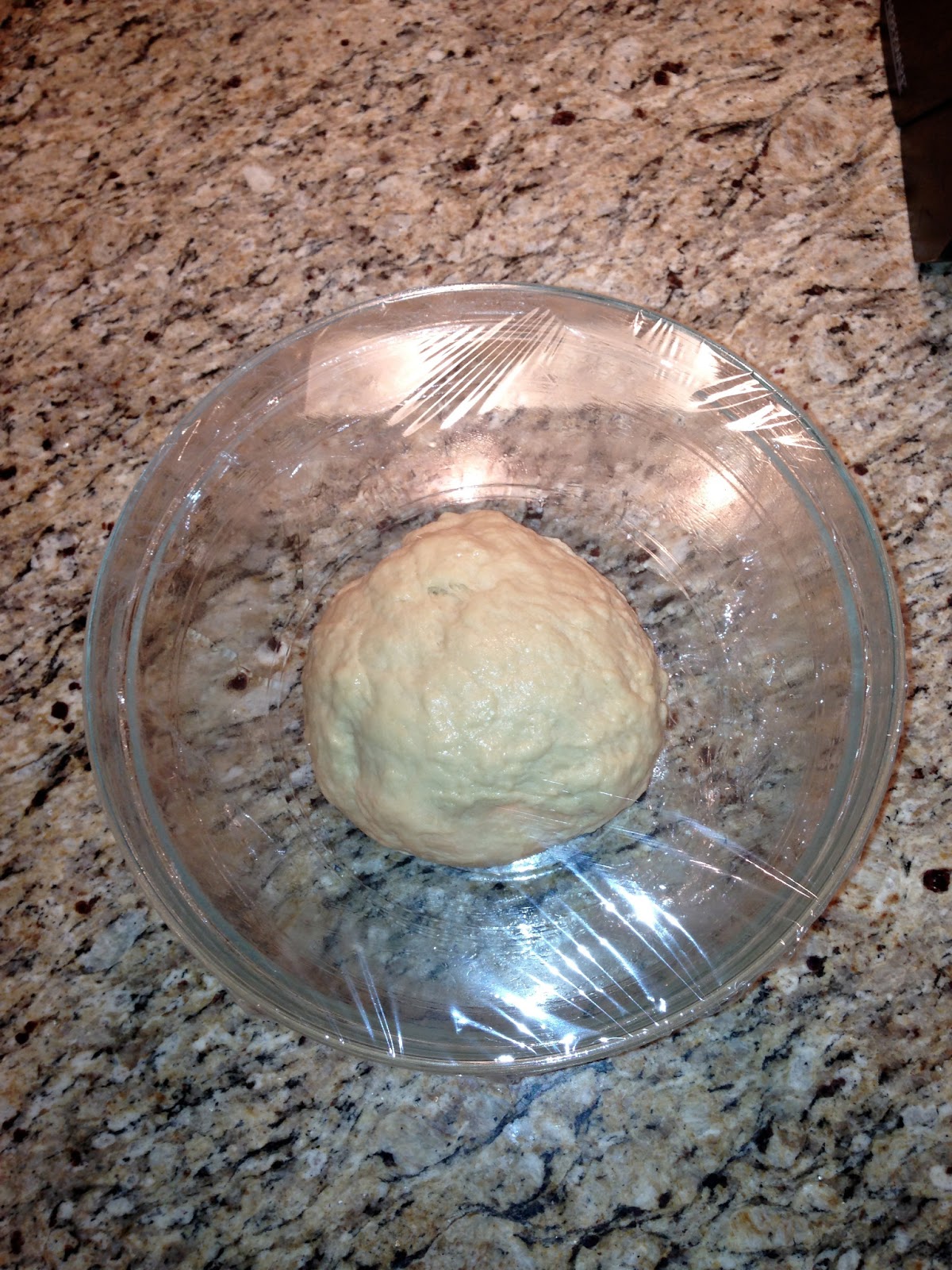 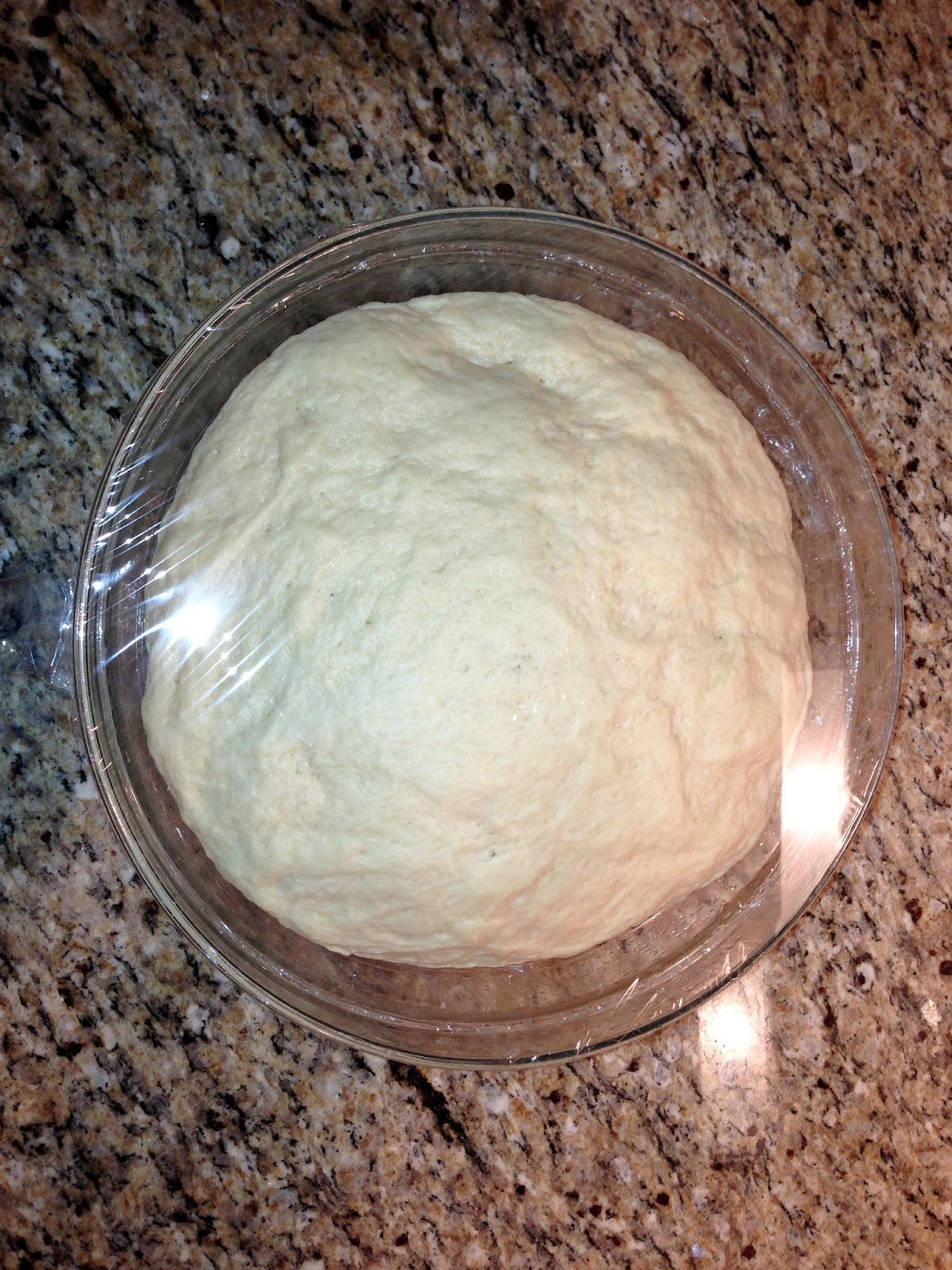 Remove dough from bowl and knead to get out all the air. Roll out the strands. Place the cinnamon chips on the strands and then pinch the strands closed. 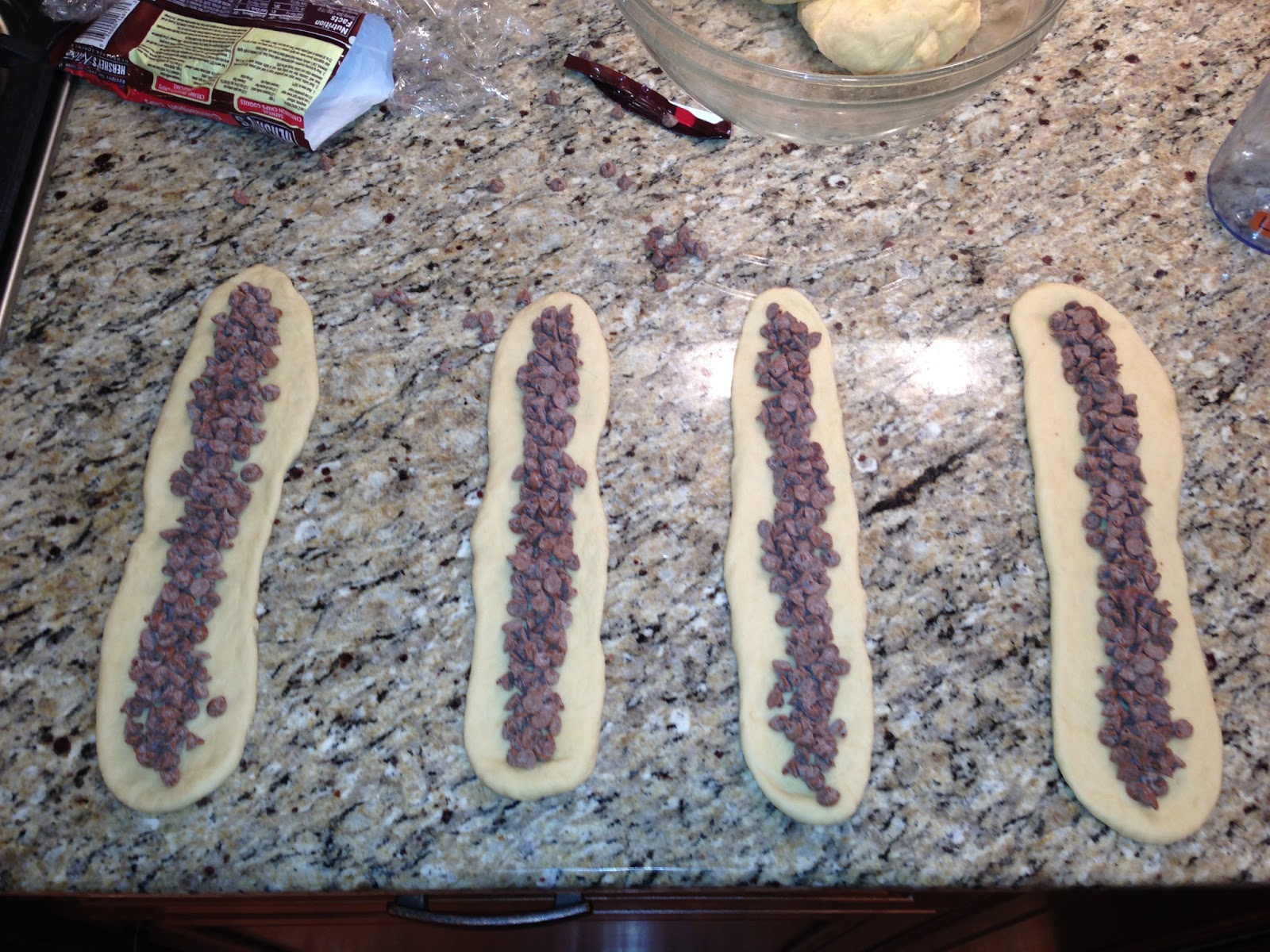 We made a round challah, but you can do any shape.

After braiding the challah place on a buttered cookie sheet and allow challah to rise for at least 30 minutes in a warm place. This allows the dough to rise again.

We decided to make a cinnamon streusel topping like you would for a coffee cake. This ended up being kind of a disaster and I ended up making 2 different toppings, and I have absolutely no clue how much of what is in them. But you can using your favorite streusel recipe and sprinkle it over the egg wash after the challah has risen.


Bake for about 30 minutes at 350 or until internal temperature is around 170. If the top of the challah is getting too dark or hard then place a piece of foil on top of it while the inside continues to cook. 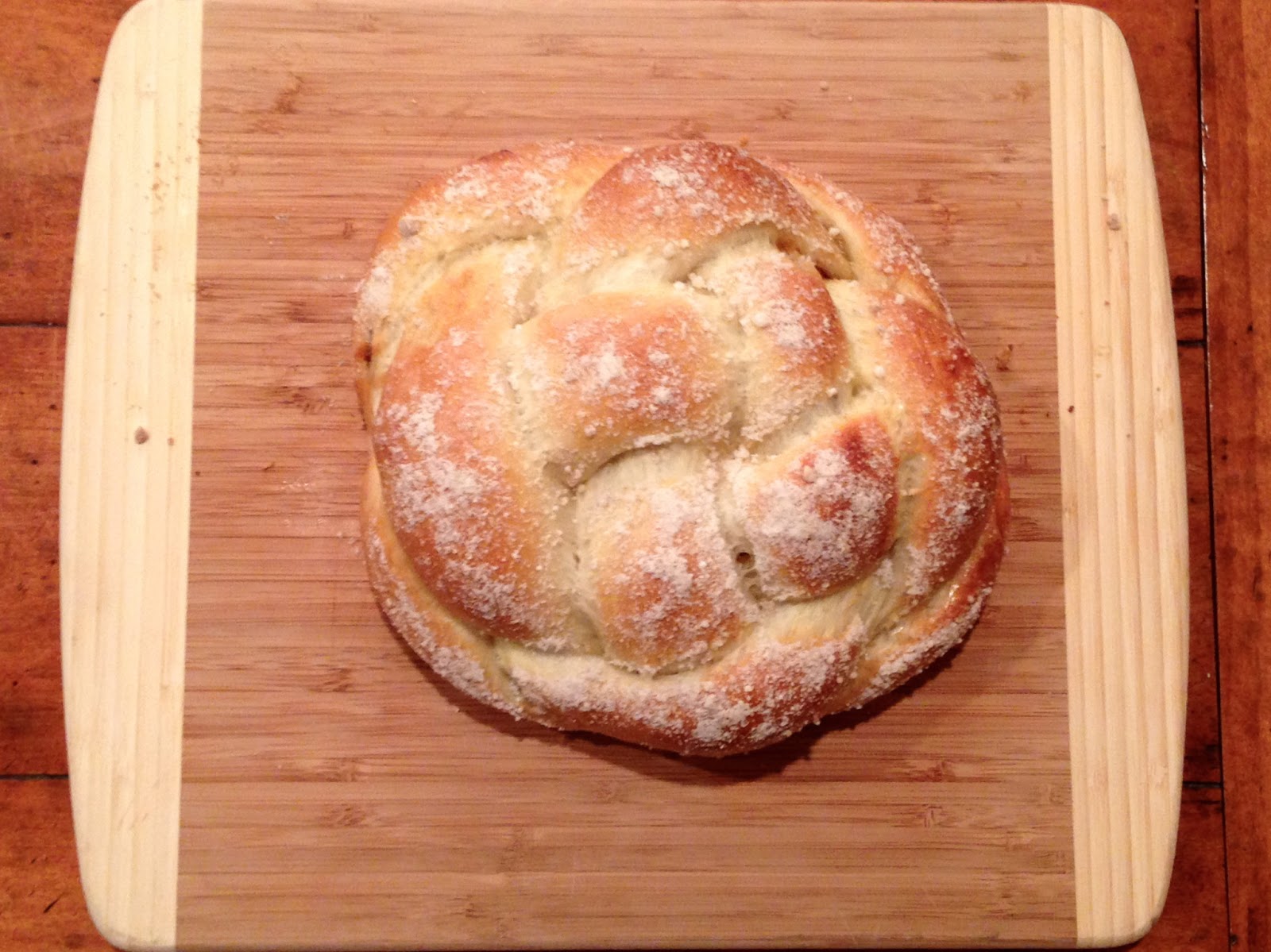 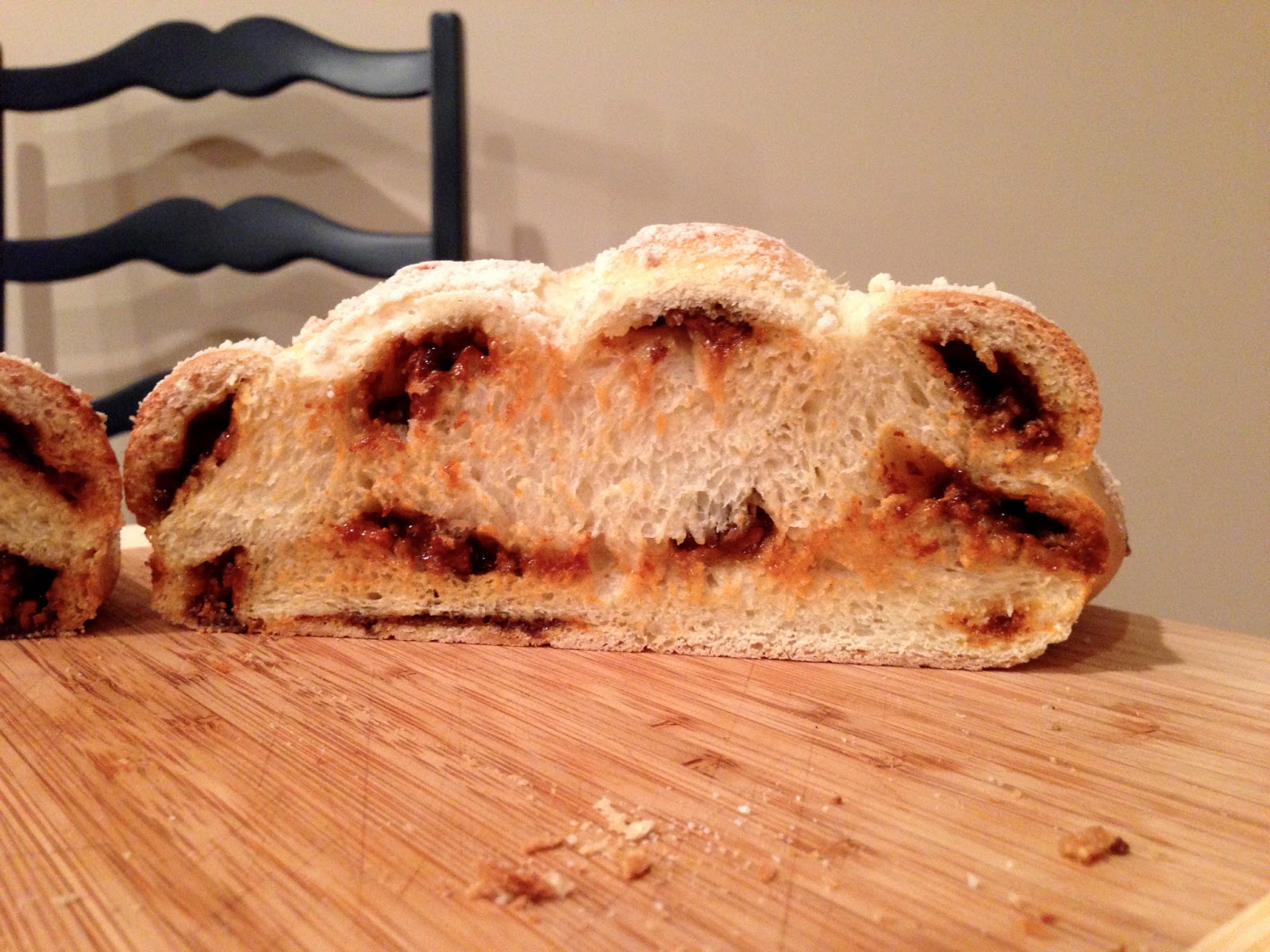 Yum, yum, yum! Tastes like a cinnabon! All it needs now is some frosting!
Posted by Unknown at 1:36 PM No comments: