The best part about Chanukah, besides presents of course, is the food. Jelly donut challah was the obvious choice, especially since I figured that a latke challah wouldn't taste very good. This year we were "bad Jews." Although I celebrated the first night of Chanukah with both Hillel and Chabad at school, mom and Jenn did absolutely nothing. I didn't even light my own menorah until the 6th night. However, in my defense, I was at school for the first few days of Chanukah and I'm not allowed to light candles my sorority house.

Why is is that we feel guilty for not lighting candles or going to temple?

During my time in Israel we had a few speakers. One of them talked about what it means to be Jewish. His speech had two main points. His first point was that being Jewish is not a religion. His second point was that you cant be kind of Jewish or very Jewish, you are either Jewish or your not. After talking to our group's Israeli soldiers we learned that our soldiers don't go to temple, even for high holidays, and they don't know the prayers. This isn't uncommon in Israel, it is mostly just the orthodox Jews that go to temple. Judaism is just a way of life in Israel, for instance stores close early on Fridays and hotel elevators stop on every floor on Shabbat. Because we live in America and our county does not adopt such practices, we feel like we have to actively celebrate holidays rather than letting them just automatically be part of our lives. So we really weren't being "bad Jews" and my mom and sister weren't being any less Jewish than me. 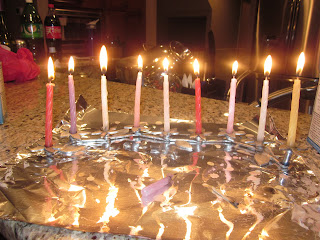 Mix water, yeast, white sugar, and honey in a mixing bowl. Place in a warm place. This could be next to a window that gets sunlight, or I like to place it in the oven at 120 degrees. Let stand for about 10-15 minutes or until the mixture starts to foam. 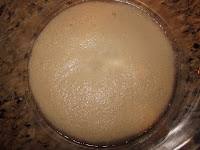 In a separate bowl mix 2 eggs, brown sugar, 2 tbsp oil, and vanilla. Add to the yeast mixture after it has foamed.

Knead the ingredients and form into a ball. Oil the large bowl and then roll the ball of dough in the oil. Place the ball back in the bowl and cover with plastic wrap. Place it in a warm place. Let the bowl sit for 30-60 minutes, or until he dough has doubled in size. 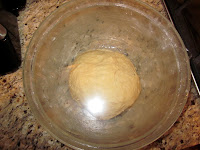 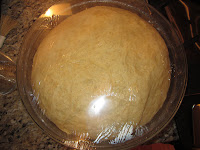 Remove dough from bowl and knead to get out all the air. Roll out the strands.

Scoop out jelly and smooth it out over the center of the strands. If you want you can add white chocolate chips on top of the jelly. No matter how much jelly you use it is going to leak out. Also jelly is a pain in the butt because it makes it nearly impossible to close the strands because it is wet and sticky.

We ended up taking out some of the jelly and chips because it was too full and the strands wouldn't close.

We made a three strand challah, single challah knots, and one spiral challah, but you can do any shape you like. 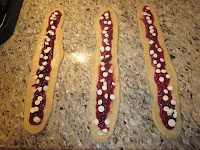 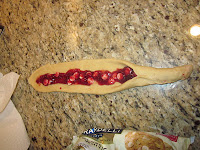 We made a three strand challah, single challah knots, and one spiral challah, but you can do any shape you like.

After braiding the challah place on a buttered cookie sheet and allow challah to rise for at least 30 minutes in a warm place. This allows the dough to rise again.